The Falcons have announced that Cowboys DBs coach Jerome Henderson is not interviewing for a position other than defensive coordinator.

Richard Smith is the Falcons' defensive coordinator and that's not changing. Coach Henderson is interviewing for a job on staff, but not DC.

Henderson actually interviewed for the Browns head-coaching job and met with the Jaguars regarding their defensive coordinator position.

Henderson, 46, began his coaching career with the Jets back in 2006. He spent three years in New York before departing to become the defensive backs coach for the Browns. Dallas elected to hire him in the same capacity in 2011 and he has remained in his current position since joining them. 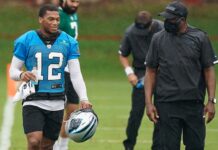