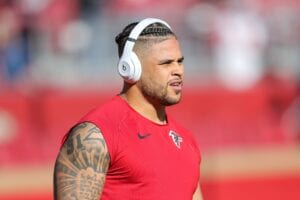 Smith, 27, signed on with the Cowboys as an undrafted free agent out of San Jose State back in 2014. He was on and off of their practice squad the first few years before converting from linebacker to fullback for the 2016 season.

The Cowboys declined to tender Smith a restricted offer, allowing him to become an unrestricted free agent last year. The Raiders signed him to a two-year, $4.2 million deal last offseason only to release him coming out of the preseason.

Smith later signed on with the Falcons and returned to Atlantal this offseason on a three-year extension.

In 2019, Smith appeared in all 16 games for the Falcons and rushed for eight yards on five carries to go along with one reception for 13 yards receiving and no touchdowns.