The Atlanta Falcons brought in seven players for workouts on Wednesday including RB Jordan Wilkins, according to Aaron Wilson. 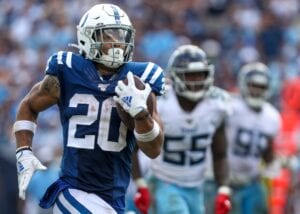 In 2021, Wilkins appeared in four games but hasn’t recorded a stat. Last year, Wilkins played in 15 games for the Colts and rushed for 308 yards on 84 carries (3.7 YPC) to go along with 12 receptions for 105 yards receiving and one touchdown.