According to Ian Rapoport, Falcons WR Calvin Ridley recently had foot surgery to clean up an issue. 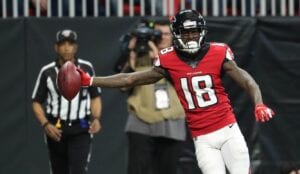 Rapoport calls the surgery minor and while it will keep Ridley out of minicamp this week, it’s not expected to sideline him for training camp starting at the end of July.

Ridley will enter the 2021 season as the Falcons’ unquestioned No. 1 receiver following the trade of Julio Jones.

The Falcons exercised Ridley’s fifth-year option this offseason which will cost Atlanta $11.116 million fully guaranteed in 2022.

In 2020, Ridley appeared in 15 games for the Falcons and caught 90 passes for 1,374 yards receiving and nine touchdowns.