Ian Rapoport of NFL Media reports that former Giants WR Jerrel Jernigan tried out for the Buccaneers this week.

This is the first reported interest in Jernigan since free agency got underway a few weeks ago.

In 2014, Jernigan was limited to appearing in just two games for the Giants and caught six passes for 40 yards receiving and no touchdowns. His season was cut short after he sustained a mid-foot sprain and was later placed on injured reserve. 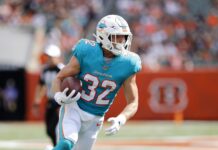