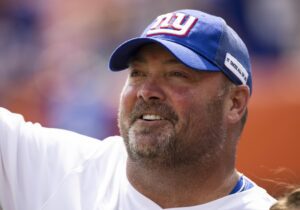 Kitchens previously filled in as play-caller for the Giants when Garrett tested positive for COVID-19 last year.

Kitchens, 46, began his coaching career back in 1999 as the RBs/TEs coach for Glenville State. He worked for a few schools before being hired by the Cowboys as their TEs coach for the 2006 season.

Kitchens later joined the Cardinals and held a few jobs including TEs coach, QBs coach and RBs coach before joining the Browns as their RBs coach and associate HC. After the team fired Todd Haley, Kitchens took over as offensive coordinator.

Cleveland elected to hire Kitchens as its next head coach for the 2019 season. In his one season as head coach, the Browns went 6-10.

The Giants hired Kitchens as their tight ends last year.