Adam Schefter reports that former Bears RB Tarik Cohen underwent an MRI on Tuesday and was confirmed to have suffered a torn Achilles. 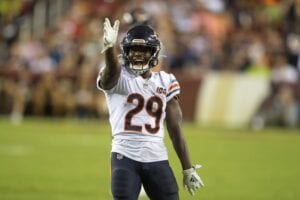 Out of respect to Cohen, we will not be sharing the video. There is an audible pop and he collapses holding his heel, indicating a potential Achilles injury per Pro Football Doc.

This is another stroke of bad fortune for Cohen, who faces another lengthy and difficult rehab if he has indeed torn his Achilles.

Cohen was released earlier this offseason by the Bears with an injury designation as he struggled to come back from a torn ACL suffered in 2020.

Cohen, 26, is a former fourth-round pick of the Bears out of North Carolina A&T back in 2017. He was in the final year of his four-year, $3.03 million contract when he agreed to a three-year deal with a maximum value of $18.25 million.

Cohen’s contract with the Bears included a base value of the deal is $17.25 million and includes $9.533 million fully guaranteed. He was placed on injured reserve in September of 2020 after suffering a torn ACL in Week 3 and spent last year on the PUP list.

The Bears released Cohen with an injury designation in March.