With the Saturday deadline approaching, the San Diego Chargers have stepped up their efforts to move Vincent Jackson by allowing him to negotiate a contract with another team that may have interest. This news comes from Kevin Acee of the San Diego Union-Tribune.

Jackson and his agent will have until 6:00 pm Saturday to get a deal in place. Acee also adds that Jackson may be willing to sign a one-year, $7 million deal even though such a deal would hurt the Chargers return package. Acee write that Chargers GM A.J. Smith, “is known to appreciate compensatory draft picks when an unrestricted free agent leaves,” which means that he may actually be willing to hold onto him instead up accepting a below average trade for Jackson. 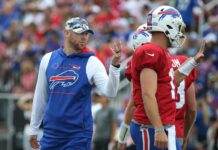