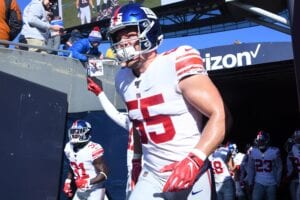 Mayo has been working his way back from a torn meniscus and has missed the first four games of the season.

Mayo, 26, is a former fifth-round pick of the Panthers back in 2015. He played out the final year of his four-year rookie contract with the Panthers and signed with the 49ers in free agency.

San Francisco released Mayo during final roster cuts coming out of the preseason last season and he later signed on with the Giants. He signed a three-year, $8.4 million extension this offseason.

In 2019, Mayo appeared in all 16 games for the Giants and recorded 82 tackles, two sacks, a fumble recovery and two pass defenses. Pro Football Focus has him rated as the No. 14 linebacker out of 89 qualifying players.