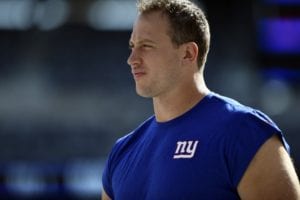 Duggan adds that Solder’s 2020 salary has been reduced to $4 million. However, this isn’t expected to be a straight salary cut and could includes some bonuses and whatnot.

Interestingly enough, Duggan expects Solder to serve as the Giants’ swing tackle if Matt Peart is ready to start at right tackle.

The veteran opted out of the 2020 season due to concerns over COVID-19 and his family. He was set to have a $16.5 million cap hit which was pushed to this season.

Solder, 32, is a former first-round pick of the Patriots back in 2011. He played seven seasons for the Patriots before agreeing to a four-year, $62 million contract with the Giants in 2018.

Solder stands to make base salaries of $9.9 million each of the next two years of his deal after his contract tolled last year.

In 2019, Solder started all 16 games for the Giants at left tackle. Pro Football Focus had him rated as the No. 45 offensive tackle out of 82 qualifying players.