Giants owner John Mara commented on the status of RB Saquon Barkley at the NFL owners meetings this week. Barkley has come up in trade rumors and new GM Joe Schoen has expressed a willingness to listen to offers. 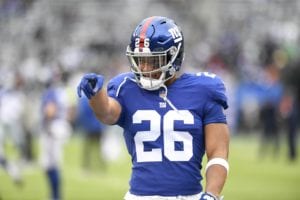 However, Mara downplayed the idea of a trade, at least not unless the team gets a strong offer.

“We’re not shopping Saquon, but Joe’s the general manager,” Mara said via Pat Leonard of the NY Daily News. “If he and the head coach want to make a personnel decision and have a conviction about it, I’m not gonna interfere with it. But that’s not something we’re actively looking to do, let’s put it that way.”

Barkley’s status with the Giants is an interesting situation to watch, considering he’s in the final year of his rookie contract and it’s unclear if New York wants to commit to an extension given his injury history.

The sense other teams has gotten is that the Giants want a first-round pick for Barkley, which might be too steep. However, it might be hard for New York to justify giving up their best offensive player for anything less.

Barkley is the Giants’ biggest star on offense and their most marketable player but Mara said he wouldn’t veto a trade for that reason.

“I’m certainly conscious of that but I don’t think it’s a major factor,” Mara said. “At the end of the day, [I want us to] put the best possible team on the field and build for the future. So I like him. He’s been a great representative for us. I still think he’s a really good player. He could potentially have a very big year this year. But at the end of the day the head coach and general manager make those decisions.”

Barkley, 25, was the second-overall pick in the 2018 NFL Draft. He was entering the fourth year of a four-year, $31.19 million rookie deal with the Giants that included a $20.767 million signing bonus when the Giants picked up his fifth-year option last year.

Barkley’s fifth-year option will cost the Giants $7.22 million fully guaranteed for the 2022 season. He will be an unrestricted free agent in 2023.

According to OverTheCap.com, trading Barkley would free up $7,217,000 of available cap space while creating no dead money.

We’ll have more regarding the Giants and Barkley as the news is available.