The New York Giants announced Saturday that they’ve promoted WR Austin Mack to their active roster for Week 4’s game against the Rams. 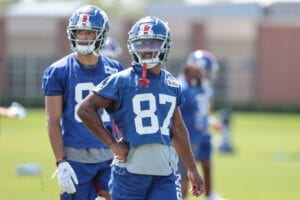 Mack, 23, wound up going undrafted out of Ohio State back in April. He later signed a three-year, $2.28 million contract with the Giants, but was waived coming out of training camp.

The Giants did, however, re-sign Mack to their practice squad after clearing waivers.

During his college career at OSU, Mack caught 79 passes for 1,050 yards receiving and six touchdowns over the course of four seasons and 32 games.