The New York Giants signed OL KC McDermott to their practice squad, according to Dan Salomone. 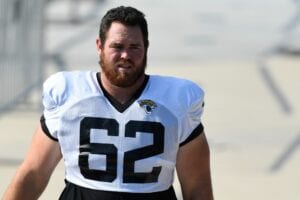 McDermott recently visited the Lions, but walked away without a deal.

McDermott, 26, wound up going undrafted out of Miami back in 2018. He later agreed to a three-year, $1.71 million contract with the Jaguars.

McDermott was waived again in 2020 and re-signed to the practice squad. He bounced back and forth between the practice squad and active roster for the next two seasons before Jacksonville released him during final cuts this year.

For his career, McDermott has appeared in 16 games for the Jaguars and made one start.