According to Field Yates, the Giants waived TE Kaden Smith with a failed physical designation on Friday. 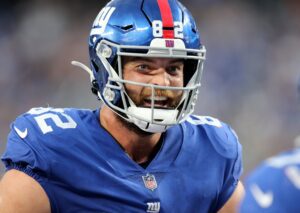 Smith, 24, is a former sixth-round pick by the 49ers in the 2019 NFL Draft out of Stanford but was waived as a rookie and claimed by the Giants.

In 2021, Smith appeared in nine games and recorded three receptions for 33 yards and no touchdowns.