According to Jason La Canfora of CBS Sports, Jaguars GM Trent Baalke is a “big supporter” of Alabama OC Bill O’Brien and has proposed to ownership to pair him with current Broncos HC Vic Fangio as defensive coordinator. 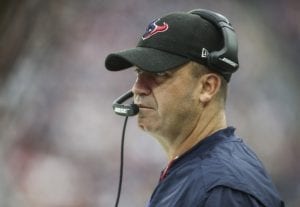 There are reports that Denver is likely to fire Fangio in the coming days, which would once again make him one of the most sought-after assistant coaches in the NFL.

O’Brien is set to interview for the Jaguars’ head-coaching job on Monday and La Canfora says that his “candidacy has continued to gain steam” despite the fact that he was not among the initial list of candidates to be interviewed for the position.

Reports have said that a number of candidates have serious reservations about taking the Jaguars’ job with Baalke in place as GM. However, La Canfora mentions that O’Brien is very much aligned with Baalke and would set his sights on landing Fangio as defensive coordinator should he be fired.

Jaguars fans have been protesting the decision to keep Baalke, but owner Shad Khan doesn’t appear to be impacted by it.

We’ll have more regarding the Jaguars as the news is available.