In his pre-draft press conference, Jets GM Joe Douglas told reporters they have already started laying “groundwork” to potentially trade up in the draft, per Connor Hughes. 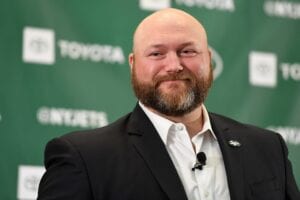 New York obviously isn’t moving up from No. 2 overall, as there’s nowhere to go but No. 1 and Jacksonville is pretty locked in on its pick there.

With two thirds, two fourths, two sixths and a fifth, to say nothing of a plethora of picks next year, Douglas has the ammunition to move up if a player he likes starts to slide.

The Jets have a number of needs on both sides of the ball, so there are plenty of directions they can go with their picks.

We’ll have more on the Jets’ draft plans as the news is available.