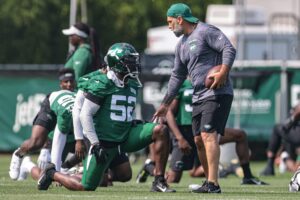 Detroit declined Davis’ fifth-year option last May, which made him an unrestricted free agent in 2021. He signed a one-year deal worth up to $7 million with the Jets.

Davis, 24, was a four-year starter at California and was a finalist for the Burlsworth Trophy before the Jets selected him with the No. 68 pick in the 2020 draft.

In 2020, Davis appeared in 10 games for the Jets and recorded 36 total tackles, one fumble recovery and one pass defense.