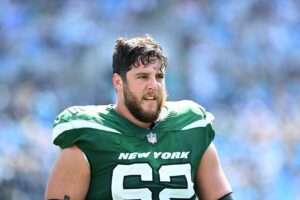 This comes shortly after the team claimed G Nate Herbig off of waivers from the Eagles.

Releasing Van Roten will free up $3.5 million of cap space for the Jets.

Van Roten, 32, originally signed on with the Packers as an undrafted free agent out of Pennsylvania back in 2012. He was, unfortunately, released coming out of the preseason but later signed on to the Packers’ practice squad.

After the Packers moved on from Van Roten in 2014, he had a brief stint with the Seahawks before eventually signing on with the Jaguars in February of 2017. Unfortunately, Jacksonville cut Van Roten loose after the draft and he eventually signed a one-year contract with the Panthers.

As a restricted free agent, Van Roten instead signed a two-year extension with Carolina ahead of the 2018 season. From there, the Jets signed him to a three-year contract worth $10.5 million in 2020.