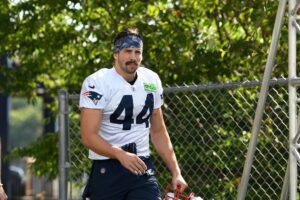 Keene, 23, was selected with the No. 101 overall pick in the third round of the 2020 draft after the Patriots traded up to get him.

He had a brief stint on the Eagles’ practice squad as well.

In 2020, Keene appeared in six games and caught three passes for 16 yards receiving.