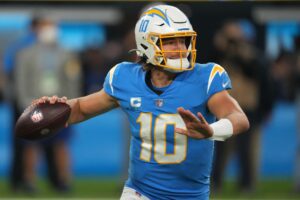 Staley added that the quarterback could return to practice next week.

This is encouraging news that Herbert didn’t sustain a serious injury and bodes well that he’ll still be available going forward.

The contract includes a fifth-year option for the Chargers to pick up for the 2024 season.

In 2022, Herbert has appeared in two games, completing 72 percent of his passes for 613 yards, six touchdowns, and one interception.