According to Todd Karpovich, the agent for Ravens OT Orlando Brown Jr. is still pursuing a trade with the hopes things heat up before the draft at the end of the month. 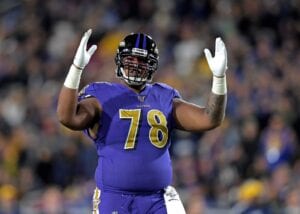 Karpovich adds that while the team is working with Brown’s agent, there is no rush to make a deal. Per Karpovich, Ravens GM Eric DeCosta has spoken with them about Brown’s future in Baltimore.

Six teams have reportedly shown interest in Brown but nothing has materialized on a deal so far.

Karpovich says the list of potential landing spots for Brown includes the Bears, Colts, Chiefs, Vikings and Chargers but the Ravens are expecting a significant return for Brown, including a first-round pick.

In 2020, Brown appeared in all 16 games for the Ravens and made 16 starts for them. He was rated by Pro Football Focus as the No. 25 tackle out of 79 qualifying players.

We will have more news on Brown and the Ravens as it becomes available.