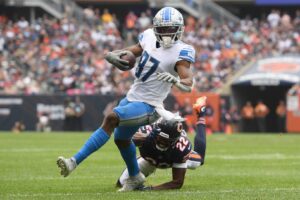 This move was expected after Cephus suffered a broken collarbone in Sunday’s loss to the Vikings.

Cephus, 23, was a three-year starter at Wisconsin before being selected by the Lions in the fifth round of the 2020 NFL Draft.

In 2021, Cephus has appeared in five games for the Lions, recording 12 catches for 166 yards and two touchdowns.