According to Ian Rapoport, Lions S Tracy Walker is believed to have suffered a torn Achilles in Week 3. 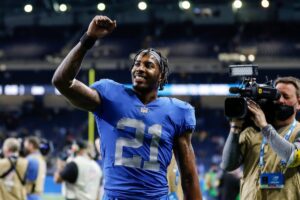 The team is still doing tests to confirm the news but torn Achilles tendons are usually relatively easy to diagnose and Walker went down with a non-contact injury.

Expect the Lions to place Walker on injured reserve shortly.

Walker, 27, was drafted by the Lions in the third round out of Louisiana in 2018. He just finished the final year of a four-year, $3.51 million rookie contract that included a signing bonus of $881,998.

Walker was set to be an unrestricted free agent this offseason when he agreed to a three-year, $25 million extension to stay with the Lions.

In 2022, Walker appeared in three games for the Lions and recorded 19 total tackles, one tackle for loss, one sack and one pass deflection. Pro Football Focus had him rated as the No. 14 safety out of 67 qualifying players.