ESPN’s Chris Mortensen started the speculation that Detroit Lions could be one of the favorites for Bengals CB Jonathan Joseph.

“I say watch out for Lions and Bengals FA CB Johnathan Joseph,” he writes.

As ESPN’s KC Joyner points out, Joseph could be a better value than Nnamdi Asomugha.

“Joseph has been targeted nearly three times as often as Asomugha over the past two seasons and yet has a lower YPA total. This isn’t to say that Joseph is the better cornerback, but if he can be had for half the cost of Asomugha (or less), it could be a move that provides much more bang for the buck,” writes Joyner.

Detroit really needs help at cornerback and landing Joseph could be another great addition to their solid young defense. 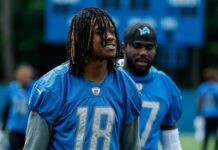