Kevin Acee of the San Diego Union-Tribune reports that Marcus McNeill met Wednesday with G.M. A.J. Smith to discuss where things currently stand between the two parties but Acee’s sources did mentioned that the meeting produced little progress.

McNeill is looking for a long-term contract while A.J. Smith has made it very clear that the team has no intentions of exploring this possibility and has since issued McNeill a letter that says that if he fails to report to the team by August 20, he would then be placed on the roster-exempt list. Basically, this would force McNeill to report by week 7 instead of week 10 in order for him to get a year of credit and become an unrestricted free agent in 2011.

The problem is that despite being all-pro caliber left tackle, McNeill has very little leverage in the negotiations with the Chargers which is why Shawn Merriman ended his hold and joined the team a week ago.  You can expect this to play out into the regular season before any sort of resolution takes place. 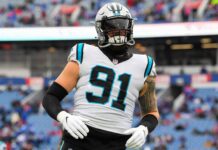