Mike O’Hara of Fox Sports Detroit is reporting that the Detroit Lions could be without QB Matthew Stafford for the rest of the 2010 season.

The early indications are that Stafford has a grade 3 separation of his right shoulder which is worse than the earlier injury that kept him out for five weeks. O’Hara’s sources have told him that the Stafford will not play again this season.

Backup quarterback Shawn Hill is still recovering from a broken arm so the team will have a decision to make regarding who will start Sunday’s game. 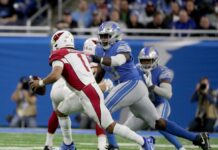