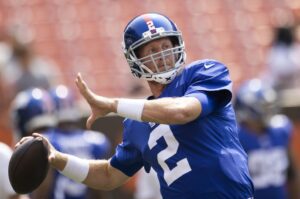 The Giants will start Jake Fromm in their season finale and it’s possible they will elevate Brian Lewerke from their practice squad to serve as his backup.

Glennon, 31, is a former third-round pick of the Buccaneers back in 2013. He played out the final year of his four-year, $3.104 million rookie contract before signing a three-year, $45 million contract with the Bears in 2017.

The Jaguars signed Glennon on a one-year deal in 2020. He was released and added to the practice squad before signing on with the Giants this past March.

In 2021, Glennon has appeared in six games and completed 53.9 percent of his passes for 790 yards, four touchdowns and 10 interceptions.