Ian Rapoport of NFL Media reports that the Titans and WR A.J. Brown would like to work on a long-term extension that offseason. 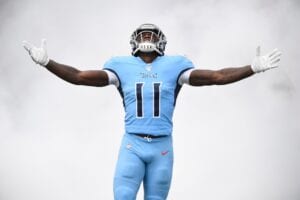 According to Rapoport, this would likely result in Brown being one of the highest-paid receivers in the NFL.

A top-five salary for the receiver position would require the Titans to pay Brown $20 million or more per season.

Tennessee would have their franchise tag available in 2023 if need be, but it sounds like they could have an agreement in place well before then.

Brown is in line to be an unrestricted free agent in 2023.

In 2021, Brown appeared in 13 games for the Titans and caught 63 passes for 869 yards receiving and five touchdowns to go along with 10 yards rushing.