Packers K Mason Crosby had a career-worst performance on Sunday, missing 4 of 5 field goals and one extra point.

After the game, Crosby told reporters that this is “uncharted territory” for him.

“I’ve done this a long time and I’ve never had a game like that,” Crosby said, per Rob Demovsky. “This is uncharted territory.”

Crosby explained that he felt in rhythm, but the results just weren’t there for him.

“Every attempt I felt like I was in rhythm going through it,” Crosby said, via The Athletic. “It was one of those days that just wasn’t there. I’ve done this a long time, and I’ve never had a day where it wasn’t there like that. We’ll look at it, look at every facet of it and flush it.” 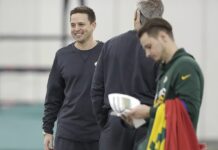 171,358FansLike
7,623FollowersFollow
251,837FollowersFollow
© NFLTradeRumors.co is an independent news source and has no affiliation with the National Football League (NFL), NFL.com, or any team(s).
wpDiscuz