New Buccaneers WR Cole Beasley admitted he wasn’t sure if he was going to end up with a team after going all offseason and camp without any options. So after all of that, ending up in Tampa Bay, even if it’s on the practice squad, is about as good as he could have hoped for.

“When you wait that long, you don’t know if you’re going to get a shot,” Beasley said via the Athletic’s Greg Auman. “It was definitely different. This was the first time I’ve missed a training camp and OTAs and all that. It was a new experience for me. I was just ready to get in somewhere and show I can still play.”

Beasley said he was pitching Buccaneers QB Tom Brady for a while on joining his receiving corps.

“I’m going to be honest, I was hitting him up a lot,” said Beasley. “I slid into his (DMs) for sure. I’m sure a lot of guys do that. I’ve been messaging him for a while. He didn’t really say anything until recently. … A lot of guys got banged up a little bit in here, so it gave me an opportunity to come in here and get some work, get them to look at me a little bit. I don’t know what my role’s going to be at this moment, but I’m just coming in humbled and ready to be a part of it.”

Beasley’s track record is good and he was solid as recently as last season. Nothing is guaranteed on the practice squad, however, and Buccaneers HC Todd Bowles took a measured tone when discussing Beasley’s potential contributions.

“Cole’s a viable receiver,” Bowles said. “Obviously, if people still keep going down, he’ll be somebody we can bring up. … He hasn’t played in a while. He’s been on the street. We’ve got to see what he knows and what kind of shape he’s in, and we’ll kind of go from there.”

Saints QB Jameis Winston reflected on throwing three interceptions in the fourth quarter of Week 2’s game against the Buccaneers.

“I will do a better job of staying mellow in the madness,” Winston said, via ProFootballTalk.

Winston is playing through ankle and back injuries but is more focused on executing at a high level.

“I just feel like a lot of guys are playing with something, but my focus is on making great decisions, on executing, and winning football games,” Winston said. 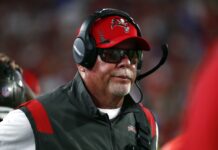