Eagles’ GM Howie Roseman says that the team felt they had suitable replacements for veteran S Malcolm Jenkins or else they would not have let him go in free agency.

“We wanted to make sure that if for some reason it wasn’t going to work out with Malcolm,” Roseman said, via Jeff McLane of The Philadelphia Inquirer “we had someone back there who could continue to get us lined up and provide leadership, and we feel we did that.”

Eagles’ HC Doug Pederson also weighed in on the issue of Jenkins’ departure leaving a hole in the team’s secondary.

“It’s hard to replace a Malcolm, you know?” Pederson said. “I think it’s hard. His leadership the last couple of seasons is something that’s hard for someone to just step in and take that role.” 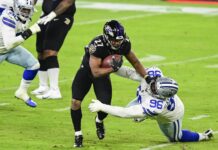