Second-year 49ers LB Fred Warner and big free-agent acquisition LB Kwon Alexander will spend a lot of time next to each other as San Francisco’s two starting inside linebackers this year. So far during OTA’s, they’re already partnering up even as Alexander continues to recover from a torn ACL in 2018, standing together behind the defense.

“It’s good to stand back there because then we can see everything, from that point of view,” Warner said via NBC Sports’ Jennifer Lee Chan. “We go through close calls and seeing different adjustments that we’re making. Most of the time we’re just talking trash to the offense too.”

Alexander appeared in only six games for the Buccaneers last year before tearing his ACL. However, the 49ers were confident enough to sign him to a massive deal in free agency and Warner’s confident Alexander will return as good as ever.

“He brings a lot of energy,” Warner said. “He’s brought a swag to the group for sure. I’m looking forward to seeing him out there running around. I see him during workouts and he looks great.”

Cardinals GM Steve Keim indicated that there could be more moves coming for the team, given that they still own the top waiver claim, have an open roster spot and around $6 million of available cap room.

“We had a lot of success in the past when we have had late-summer signings,” Keim said, via AzCardinals.com. “There are players out there that we can find that will make this football team better.”

Rams DE Dante Fowler knew shortly after the trade that brought him to Los Angeles from the Jaguars that he wanted to be a Ram long-term.

“Really wasn’t feeling myself until I got here,” Fowler said via ESPN’s Lindsey Thiry. “… the coaches put me in a very great position, just like letting me be me, let me be the Dante Fowler that basically got me here.”

After signing a one-year, $12 million contract, the goal for Fowler is clear: do what it takes to stay in Los Angeles.

“I’m just going to go out there and bust my tail and try to be the best player I can be on and off the field so I can try to figure out a way to stay here,” Fowler said. 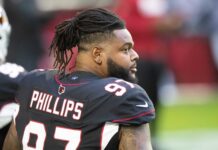