“I’m going to tell you, though, when he gets back to playing, it’s going to be, ‘You’re not here for that reason anymore, you’re here to dominate and play at a really high level. Because that’s why you’re here.’ That’s why I’m excited,” Hafley said, via the Sacramento Bee. “I can’t wait for him to get out and practice. I think he’s going to (raise) the competitiveness of the group.”

As for Jimmie Ward‘s transition back to cornerback, Hafley expects it to take some time for Ward to get used to playing there full-time.

“He played free safety last year in this system, so we know he can do it,” Hafley said. “And we believe he can do it at a high level. Now our main focus with him is just, go out and put your feet back under yourself in being a corner like you were two years ago, learn this system — it’s a little bit different; it’s not just man (coverage) all the time — and we’ll go from there with Jimmie.”

Rams seventh-round OLB Justin Lawler has been working with the first-team defense in the early part of the offseason program.

“It’s been going good. I’m picking up the defense slowly,” Lawler said, via TheRams.com. “As you can see we’ve had some injuries, so I’m going and kinda thrown in with the ones.

“I knew they were thin [and] that’s why they drafted three of us. You never wish that upon anybody, but that’s football. It’s next man up. I get hurt, hopefully not, but the next man’s gotta play. That’s football and that’s the business we’re in.”

“It’s actually easy being left handed to cope with moving to the other side,” said Griffin, via 710 ESPN. “Now it gives me a chance to take on that number one spot and continue to push everybody else. That’s what I’m working on most this year. I want to gain everybody’s trust, so they know they can count on me.”

“The way I looked at the offseason was just coming back bigger, stronger, and faster. I want to be way better than I was last year.” 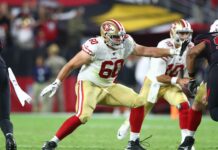