Lance Zierlein of NFL.com provided his take on some of the more noteworthy opinions put forth by NFL scouts on the current draft class. 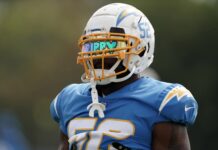