The Tampa Tribune reports that Tiki Barber will not be playing for the Buccaneers upon his return to the NFL. While this news isn’t surprising by any means, hopefully it will end the speculation of Tiki joining his brother Ronde in Tampa.

The thing that will be interesting however, will be the first team to show actual interest in signing Barber. As of now, every speculative option has downplayed any amount of interest in signing him which leaves Tiki with very little hope of having a successful un-retirement. His best option could end up being the UFL. 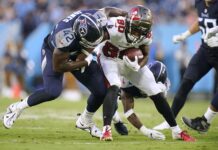