According to Jonathan Jones, the NFL sent former Buccaneers HC Bruce Arians a warning letter for his conduct on the sideline in Week 2 against the Saints. 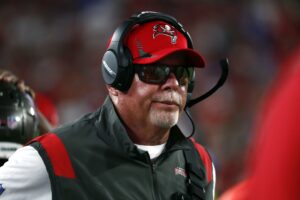 Arians has remained with the team in a front office advisory role. Usually the front office has a box on the road or sits in the press box but Arians and other front office members were on the sideline in Week 2, which is allowed.

However, Arians was on the thick white chalk that is usually reserved for just the head coach, and was spotted chewing out the officials and jawing with Saints players in the leadup to the fight that resulted in a suspension for Buccaneers WR Mike Evans.

Arians was not disciplined but Jones obtained part of the warning letter, which is below:

“As someone who has been in a leadership role as a head coach and who continues to have a profound influence on the team and the league, we would ask that you hold yourself up to a higher standard,” the letter stated. “Going forward, you must make it a priority to exemplify the values of the game. Work to defuse difficult situations, rather than provoking them or otherwise engendering ill will.

“This letter serves as a warning. Please be advised that future violations of this policy or similar conduct will result in accountability measures for you individually, as well as discipline for your club.”

Arians, 69, was hired by the Cardinals back in 2013 after he filled in for Colts HC Chuck Pagano while he was fighting cancer and managed to win Coach of the Year.

He spent five years with the Cardinals and compiled a record of 49-30-1 (61.9 percent), including two playoff appearances and a trip to the NFC Championship game in 2015.

After retiring following the 2017 season and spending 2018 out of football, Arians returned to coach the Buccaneers in 2019.

In three seasons in Tampa Bay, Arians compiled a record of 31-18 with two playoff appearances and a Super Bowl win before retiring again for good.