Tom Pelissero reports that the NFLPA plans to investigate how the Dolphins handled the concussion protocol for QB Tua Tagovailoa. 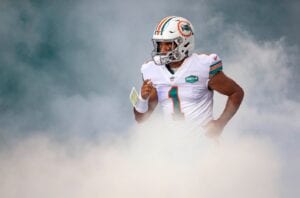 Tagovailoa returned to the game at halftime after taking a hard hit from Bills LB Matt Milano that left him wobbling and in need of assistance in the second quarter.

Tagovailoa told the media that he hurt his back on a quarterback sneak earlier in the game and reinjured it when he was hit by Milano.

“On the quarterback sneak, kinda got my legs caught under someone and they were trying to push back,” Tagovailoa said, via David Furones of the South Florida Sun-Sentinel. “It felt like I hyperextended my back. On the next play, I hit my back and kinda hurt it. Then I got up and that’s kinda like when I stumbled. For the most part, I’m good. Passed whatever concussion protocol they had.”

In 2022, Tagovailoa has appeared three games for the Dolphins and thrown for 739 yards to go with seven touchdowns and two interceptions.

We will have more news on Tagovailoa as it becomes available.