Late August is one of the most active times of year for trades, so that’s what we’re looking at in this week’s edition of NFLTR Review:

Around The Trade Block: Preseason Action

This past week was a big one for trades, as we saw three deals go down.

None of these deals are big earth-shakers but they’re indicative of the type of action we tend to see spike around this time of year. As teams get a better sense of their rosters, including strong points and weak points, they start taking low-risk, potentially higher reward shots at boosting their depth. Often this is when you see guys who aren’t going to make the team, like Little and Jackson, sent elsewhere with the hopes that a change of scenery will provide a spark.

With that in mind, we’re going to cruise through the league, position by position, to see who might be available for the right price in the next couple of weeks.

Every year, the Athletic’s Bruce Feldman releases his Freaks List — a compilation of the biggest, strongest, fastest, most absurd athletes in all of college football. His list seems like it gets longer every year and this one is huge at more than 100 names. It’s well worth the deep dive to dig into, as this list is chock full of future NFL players.

Quick-hit thoughts and observations from around the NFL…

Ran the analytics and I'd rather try to build a contender around paid guys on the left than the right. Also, Eli was PAID during his career. Probably made the most relative to his actual playing talent ever https://t.co/z3R1gcgZds pic.twitter.com/aw6yrBXVz7

Emptying the notebook here this week. We use Super Bowl wins to prop up or knock certain quarterbacks, but the truth is the best option is the one that’s going to get you in the playoffs consistently. Once you’re in, anything can happen…

Me after reading this: QB wins aren’t a great stat so neither are QB losses.

Me: Yeah but bad defenses.

Me: Yeah but other QBs had bad defenses and weren’t 8-68.

Me: But QB can still elevate a team.

I’ve been anti “QB WINZ” — wins as a primarily quarterback stat — for a long time, but we’re about to see an interesting case study this year. Few quarterback’s reputations have misaligned with their record like Matthew Stafford. Now he’s in a pretty much perfect scenario. And out of excuses…

Sticking with quarterbacks, Broncos GM George Paton told NBC Sports’ Peter King a couple of weeks ago that “quarterbacks are available more than franchise corners every year, at least the last couple of years,” when explaining why Denver passed on QB Justin Fields for CB Patrick Surtain. Panthers HC Matt Rhule has hit similar notes when asked why they took CB Jaycee Horn instead of Fields or another quarterback. We’ll see what happens the next few years but if Fields becomes even a Pro Bowl-level quarterback for Chicago, Surtain and Horn will need to be practically Darrelle Revis to make it worth passing on him…

And speaking of Fields…

Our calibration for spectacular plays is being recalibrated. But this is still outstanding…

And this guy in Missouri is why they’re being recalibrated. Sheesh…

Earlier this offseason, I studied team draft success over the last 4 years and Chris Ballard was very successful. He is now rewarded with a large contract extension.https://t.co/q07Q0StGAE pic.twitter.com/ShCV8TIzDO

Chris Ballard is widely seen as one of the league’s top general managers, and for good reason…

Jonathan Taylor’s first play vs. the 1s at Wisconsin to start his first scrimmage as a true freshman.

The Colts obviously could be without Carson Wentz and Quenton Nelson for a period of time to start the season. But maybe relying more on Jonathan Taylor isn’t a bad thing…

Crazy stat time. Jakobi Meyers was New England’s leading receiver last year. He was targeted 81 times and caught 59 passes for 729 yards. But no touchdowns. In fact, Meyers has zero career receiving touchdowns in the regular season. His touchdown Thursday night was his first since going off for two receiving scores in his very first preseason game in 2019 against the Lions…

However, Meyers, a former college quarterback, does have two passing touchdowns to his name in the NFL, including one to Cam Newton. Go figure…

Calvin Johnson's freshman season at Georgia Tech was 2004, the same season that Tom Brady won his third Super Bowl. Then Calvin Johnson finished his college career, was drafted, played his whole NFL career, retired, and is now in the Hall of Fame, and Brady is still playing.

How often does a receiver catch a tight window pass when controlling for arm length?

Stats and analytics in the NFL are getting better and better, and the result is cool findings like this. Really shows how it’s a game of inches…

Quantifying off-ball LBs can be tough, partially because they play a role in coverage, run stop and pass rush.

Analytical way to look at linebackers, including a couple who got some significant paydays recently…

Something I really really appreciate about Ron Rivera is how he’s willing to adapt and change. The beginning of his time in Carolina is a great example. He didn’t transform into Riverboat Ron completely overnight, but he adjusted to help the team find success. Rivera has become much more outspoken on certain social issues than he was in Carolina as he’s been exposed to new information. Political beliefs and coaching philosophies are often deeply ingrained but Rivera has shown the ability to change in the presence of new information. It’s truly a rare attribute… 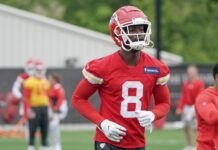 NFLTR Review: One UDFA To Watch From Every Team 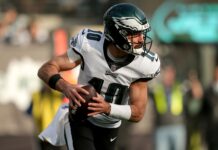