It was a good year to be a receiver, as well over a dozen cashed in big-time this offseason. In this issue:

Money has been flying around at the wide receiver position this offseason. In February, the NFL had just four receivers who made more than $20 million a year. One of those was Julio Jones until he was cut by the Titans.

Despite that, there are currently 14 members of the once-exclusive $20 million receiver club. It’s become less of an elite standard and more of a baseline. Even someone like Jaguars WR Christian Kirk, who has never made a Pro Bowl or even recorded a thousand-yard season, got $18 million a season. Back in 2012, Calvin Johnson and Larry Fitzgerald dramatically outpaced the rest of the market with deals worth just over $16 million a year. That’s Hunter Renfrow money right now.

Of course, it makes perfect sense for contracts to keep getting bigger and bigger because they’re tied to the salary cap which has grown every year except for 2020, the pandemic season. Adam Harstad, a fantasy football writer at Football Guys, has a terrific article with contract data he’s been tracking for wide receivers. He’s shown that while the total value for deals goes up as the cap does, NFL teams actually have defined tiers they slot receivers into. All the elite receivers who have reset the market for the past several years have signed for somewhere in the range of 10-11 percent of the total salary cap. Top-10 caliber receivers fell in the nine percent range, there was another tier in the eight percent range for players with less of a track record or longevity concerns, and then high-end slot receivers or clear No. 2 wideouts fell in at seven percent or less.

That changed this offseason. Here’s a table of notable wide receiver contracts signed in the past few seasons:

*Adams and Hill have inflated final years, so their contracts are adjusted to reflect more closely how the team is viewing them as an investment with guaranteed money over years. Other contracts like Brown and Diggs have similar features but not as egregious.

You can clearly see the percentages are growing, indicating teams are placing a higher value on wide receivers than they have in the past. Up and down the market, teams bumped receivers up a tier higher — at least — than you would expect accounting for historical numbers.

For instance, the deal the Chargers gave WR Mike Williams was worth 9.6 percent of the cap, which puts him in the same company as Demaryius Thomas and DeAndre Hopkins back when they signed their first extensions in 2015, per Harstad. However, both players were far more prolific than Williams, plus Godwin and Moore for that matter who signed almost identical deals. Here’s how all of them performed in the three years before their extensions, with Golladay added in for good measure:

The Kirk deal is another example. He was primarily a slot receiver with the Cardinals, and top slots have historically signed deals in the seven percent range. That’s what Renfrow got from the Raiders on his extension — although even then he signed just a two-year deal, another notable sign of the market shifting toward the players. But Kirk’s deal was a tier higher, and the way the rest of the offseason unfolded shows it might not just have been Jacksonville getting over-eager in free agency.

Adams’ deal wasn’t too far out of line with what you’d expect historically for a top-level wideout. Hill established a new frontier, though, breaking into the 11 percent range even when adjusting for the dummy year at the end of his deal. Brown and Kupp came after him and pushed the salary bar even further into the stratosphere beyond 12 percent. The rest of the 2019 class of receivers, McLaurin, Metcalf and Samuel, solidified those gains, coming in above 11 percent. While they’ve been impressive and likely get a boost due to their youth, look at their production compared to players like Thomas and Bryant who signed for less than 10 percent of the cap in the last decade.

All three are great players, but they’re not out-producing the top players from the past decade. Their production is just valued more.

Teams are at their most honest when they’re using draft picks and cap space; the precious, finite resources at their disposal to try and build a team that can win. So when the league as a whole starts allocating a bigger percentage of the cap to the position, it’s worth paying attention to. The premium positions have historically been quarterback, pass rushers and left tackles. Based on this year, we can add wide receiver to the list.

Why Is This Happening?

Positions changing in value isn’t a new concept. We’ve seen quarterbacks become more and more important as the rules have changed to favor the passing game. Conversely, running back value has cratered the past two decades. With passing effectiveness being so pivotal to success in the modern NFL, it makes sense for wide receivers to see an increase in positional value.

But that’s not what people inside the league and media members with their ears to the ground have been speculating. Supply outpacing demand is one of the reasons running backs lost so much value, and there was a school of thought that might happen at receiver too. The rise of 7-on-7 passing camps in high school and spread offense taking over college football has led to a prolific number of talented receivers entering the NFL every season. The 2019 class that just moved the market in a big way was a big piece of that, and things haven’t slowed down in the two years since.

Backs are also incredibly reliant on their supporting cast, and that’s true of receivers to an extent, too. A lot has to go well between the offensive line and the quarterback before receivers get the ball. Teams like the Steelers have had a lot of success treating the position as replaceable, cycling through all but the really special players and drafting replacements to keep the pipeline stocked each year. The Packers, Chiefs and Titans also elected to pursue cheaper options at wide receiver rather than pay the premium this offseason.

However, there are a few key reasons receivers will probably continue to maintain their importance even if the flood of talent doesn’t abate (and it doesn’t look like it will). Two-thirds of all offensive plays in the NFL last season had at least three receivers on the field. Factor in depth and that’s a level of demand that’s hard to fill. Compared specifically to running back, good wide receivers can also often maintain a high level of play through their late 20s and into their early 30s. A star receiver also has a much bigger impact on the game due to their ability to dictate matchups and win through the air instead of on the ground.

If we compare receivers to other premium positions, there’s a case for them being No. 3 in importance behind quarterback and pass rusher and ahead of left tackle, cornerback, etc. Offensive line play is a “weak link” sport. Having stars is important, but ultimately a line is only as good as its worst player because defenses can isolate them and attack. The same is true in the secondary — a shutdown corner that can erase half the field is valuable, but it doesn’t matter as much if offenses can complete passes to the other side all day.

Wide receiver and pass rusher are strong link positions. Having the best player who can win their matchup the majority of the time is more important than depth. The Bengals are a terrific case study here. They passed on OT Penei Sewell to take WR Ja’Marr Chase even though they had an offensive line that was horrific and a pretty strong pair of receivers in Tyler Boyd and Tee Higgins. Although they gave up a ton of sacks last season, their ability to dictate matchups and beat any kind of coverage due to the talented trio of Chase, Higgins and Boyd overcame that for most of the season and the Bengals ended up in the Super Bowl.

Their pass protection still let them down in the end — it’s really hard to win a Super Bowl — but there’s a strong chance they wouldn’t have come as close as they did without adding a talent like Chase. And the Rams won in large part because of the performance of two strong link players: DT Aaron Donald and Kupp.

Most of the receivers from the 2019 class who were eligible and worthy of extensions have already signed them. Steelers WR Diontae Johnson was one of the stragglers, and hopefully everything we’ve written so far has helped illustrated why Pittsburgh got a tremendous steal and Johnson left millions on the table.

The lone holdout so far is Cardinals WR Marquise Brown, who is entering his first season in Arizona after they flipped a first-round pick to the Ravens for him in a draft-day trade. They still have two years of control with a fifth-year option in 2023 at a sum of about $13.4 million. And Brown has had an inauspicious start to his Cardinals tenure with a hamstring injury and speeding arrest.

Still, he’s expected to play a huge role with the six-game suspension for Hopkins to start the season, and the price can only go up, so there’s a good chance the Cardinals are motivated to do a deal. In his first three seasons, Brown has totaled 195 receptions for 2,361 yards and 21 touchdowns. He hasn’t been named to the Pro Bowl or an All-Pro team. From a resume perspective, he’s somewhere between Kirk and Williams.

However, Brown can point to a run-first offense in Baltimore as having limited his output, and he has the additional leverage of the first-round pick Arizona traded for him. $20 million a year should be an absolute floor for his deal, and there’s a good chance Brown could make millions more if he has a strong season in 2022.

Patriots WR Jakobi Meyers and Packers WR Allen Lazard are other members of the 2019 class who could cash in in a major way in free agency in 2023, especially with the class looking majorly depleted. Veterans like DJ Chark, JuJu Smith-Schuster and Jarvis Landry will also be back on the market after signing one-year deals.

After that, Vikings WR Justin Jefferson and Chase are the two big fish who will be up for new deals in the coming years. It’ll be fascinating to see if they settle into the new slotted values the NFL has in the 12 percent range, or if they push the market even further.

One of my favorite things about the start of camp is how it brings out the big guns with some CONTENT. Check out these awesome pieces from the past week. 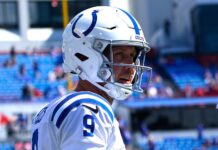 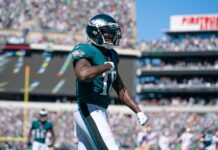