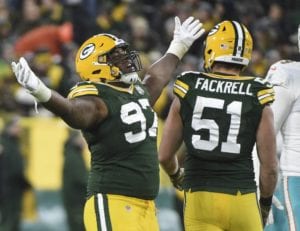 Clark, 26, is a former first-round pick of the Packers back in 2016. He was entering the final year of his four-year, $9.3 million contract when the Packers picked up his fifth-year option.

Clark stood to make a base salary of $7,690,000 for the 2020 season under the fifth-year option when Green Bay signed him to a four-year, $70 million extension.

In 2021, Clark has appeared in 13 games for the Packers and recorded 42 total tackles, four sacks and a fumble recovery. Pro Football Focus has him rated as the No. 24 interior defender out of 125 qualifying players.