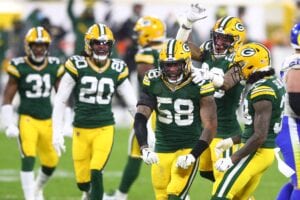 The Packers were in a touch cap situation and both Kirksey and Wagner had come up as potential release candidates, so this isn’t a big surprise.

Kirksey, 28, is a former third-round pick of the Browns back in 2014. He was in the final year of his four-year, $3.04 million contract when he agreed to a four-year contract extension worth $38 million and includes $20 million guaranteed.

Kirksey was set to make a base salary of $7.75 million for the 2020 season when the Browns released him last offseason. The Packers later signed him to a two-year, $16 million contract.

In 2020, Kirksey appeared in 11 games for the Packers and recorded 77 tackles, two sacks, two interceptions and four passes defended.

Wagner was set to make a base salary of $9 million for the 2020 season when the Lions released him last year. He eventually signed a two-year contract worth $11 million with the Packer.s

In 2020, Wagner was active for all 16 games for the Packers and made nine starts for them at right tackle.