According to Joe Person, Panthers DE Brian Burns is not at OTAs and is working out on his own in Florida. 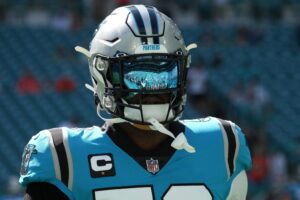 Burns was there for the start of the voluntary program and plans to be back for mandatory minicamp later this offseason before the summer. However, Person notes Burns is eligible for a new deal, so his absence is worth pointing out.

The Panthers picked up Burns’ fifth-year option this offseason and GM Scott Fitterer has highlighted him as a key player they want to keep.

“Brian would be one of those priorities moving forward,” Fitterer said at the Combine. “He’s a guy that’s come out and produced for us. I really like the leader he’s becoming, and the man that he is.”

Person points out the Panthers didn’t extend WR D.J. Moore until after his fourth season, so it’s possible something similar could happen with Burns.

In 2021, Burns appeared in all 17 games for the Panthers and recorded 50 total tackles, 13 tackles for loss, nine sacks, two forced fumbles and four pass deflections.

We’ll have more on Burns as the news is available. 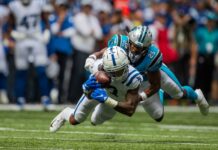