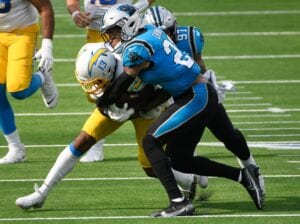 The COVID-19 list was created this summer for a player who either tests positive for or who has been quarantined after having been in close contact with an infected person or persons.
Players will remain on the list until they are medically cleared to return.

Gross-Matos, 22, was a two-year starter at Penn State and earned first-team All-Big Ten honors last season. The Panthers selected him with No. 38 overall pick in this year’s draft.

In 2020, Gross-Matos has appeared in eight games for the Panthers and recorded 16 tackles, 1.5 sacks, and a forced fumble.