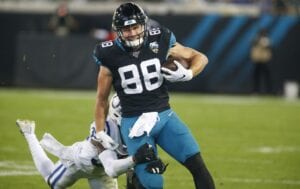 DeValve, 27, is a former fourth-round pick of the Browns back in 2016. He spent over three years in Cleveland before he was waived and later claimed off of waivers by the Jaguars.

DeValde played out the final year of his four-year, $2.72 million contract and was testing the open market as an unrestricted free agent this offseason before agreeing to a one-year, $1 million contract with the Panthers this past March.

In 2019, DeValve appeared in 12 games and caught 12 passes for 140 yards receiving and no touchdowns.

186,231FansLike
7,623FollowersFollow
276,505FollowersFollow
© NFLTradeRumors.co is an independent news source and has no affiliation with the National Football League (NFL), NFL.com, or any team(s).
wpDiscuz