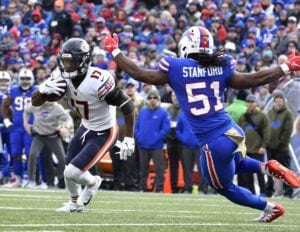 Stanford was one of four linebackers to try out for the Panthers earlier in the week.

Stanford, 29, originally signed on with the Jaguars as an undrafted free agent out of Wagner back in 2012. He had brief stints with the Lions and Buccaneers before signing with the Jets’ practice squad in 2015.

New York eventually promoted him to their active roster during the 2016 season but was eventually waived with an injury designation but he later reverted to their injured reserve list.

Stanford signed a two-year, $3 million deal with the Bills and finished out the deal this offseason.

In 2019, Stanford appeared in all 16 games for Buffalo and recorded seven total tackles, one fumble recovery, and no sacks.