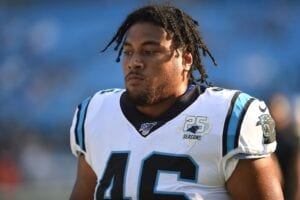 Teuhema, 24, went undrafted in 2018 out of Southeastern Louisiana State. He participated in rookie minicamps with the Bears and Jets before signing with the Arizona Hotshots of the now-defunct AAF for spring, 2019.

The Panthers signed Teuhema to a contract in June of last year only to waive him coming out of the preseason. He was later re-signed to Carolina’s practice squad and returned to the Panthers on a futures contract after the season.

Teuhema was a reserve at LSU before transferring to SE Louisiana State. He recorded 80 total tackles, 19 tackles for loss, nine sacks, two forced fumbles, one interception and two pass defenses.

186,236FansLike
7,623FollowersFollow
276,456FollowersFollow
© NFLTradeRumors.co is an independent news source and has no affiliation with the National Football League (NFL), NFL.com, or any team(s).
wpDiscuz