According to Aaron Wilson, the New England Patriots are elevating K Nick Folk and DE Tashawn Bower to their active roster for Week 2. 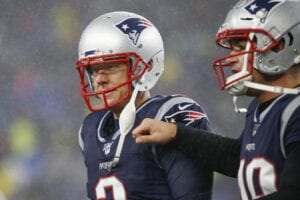 Folk, 36, is a former sixth-round pick of the Cowboys back in 2007. He spent over two years in Dallas before he signed on with the Jets in 2010 as a free agent.

Folk was entering the final year of his four-year, $12 million contract that included $2.1 million guaranteed when the Jets released him. After a short stint with the Buccaneers, Folk joined the Patriots and was on and off of their roster.

The Patriots re-signed Folk but released him coming out of camp and re-signed him to the team’s practice squad. New England promoted him back in prior to Week 1 and he was named their starter.

In 2021, Folk has appeared in one game for the Patriots and made all three of his field-goal attempts, along with one extra point attempt.