The New England Patriots announced they are activating LB Harvey Langi to their active roster for Week 3. 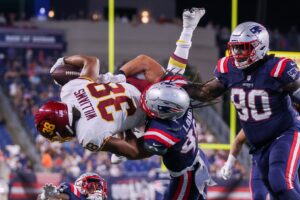 Langi, 30, originally signed with New England as an undrafted free agent after the 2017 draft. After a year, the Patriots waived Langi prior to the start of the 2018 season.

In October 2018, Langi signed on to the Jets’ practice squad, where he spent the rest of the season. The Jets re-signed Langi to a futures contract in January of 2019, and he spent the next two years in New York before the team declined to tender him. Langi signed on with the Patriots soon after.

In 2021, Langi appeared in seven games for the Patriots, recording three tackles.