Patriots RB Stevan Ridley told reporters on Thursday that although he’s entering the final year of his rookie contract, he’s not thinking about his current situation, per Albert Breer.

Instead, Ridley mentioned that he is more concerned about the fact that he needs to “go out there and be mistake-free.”

Ridley, 25, was expected to build on his successful 2012 campaign and solidify his role as New England’s No. 1 running back moving forward. However, Ridley struggled to hold on to the ball at times and saw guys like LeGarrette Blount and Shane Vereen cutting into his workload.

Blount wound up being the more consistently productive running back for the Patriots last season as he average five yards-per-carry and scored seven rushing touchdowns.

Ridley still has an opportunity to prove his worth before hitting free agency next March. The Patriots backfield also includes Brandon Bolden and fourth-round pick James White. 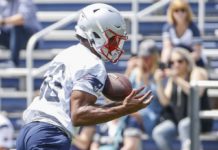 149,949FansLike
7,623FollowersFollow
227,982FollowersFollow
© NFLTradeRumors.co is an independent news source and has no affiliation with the National Football League (NFL), NFL.com, or any team(s).
wpDiscuz