According to Aaron Wilson, RB D’Onta Foreman is visiting with the Las Vegas Raiders on Tuesday. 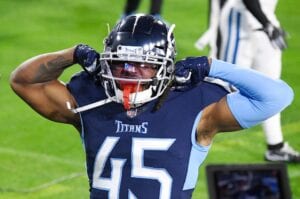 Indianapolis waived Foreman with an injury settlement and he was a free agent until catching on with the Titans in 2020. Tennessee declined to tender him a restricted offer this offseason, making him an unrestricted free agent.

Foreman signed with the Falcons at the beginning of training camp, but the team released him during final cuts.